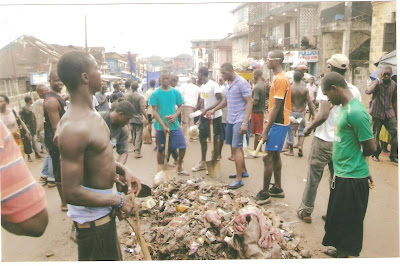 Youths participated in a cleaning exercise that was organised by FDID (SL) on the 8th of May 2010. These youths were formal combatants that fought in the eleven years old civil war in the country. We as a civil society organization saw the need to engage various youth organizations in a bid to clean the central business district of the capital Freetown. This area is densely populated with a lot of business activities going on which makes this environment very filthy on a daily basis. We engaged, dialogued and lobbied with these youths to join us to clean their own environment. These transformed youths came out in their numbers to clean their environment. This is to show that we as an organization have being successful in transforming these youths to be positive and useful citizens of their various communities.
Posted by fdidsl at 7:23 AM No comments:

Foundation for Democratic initiatives and Development is a Human Right civil society organisation with a development agenda working to defend the rights of Sierra Leoneans from oppresive regimes and making the lives of the people better.
Since it’s inception FDID has championed human right abuses in the capital Freetown and other parts of the country where these abuses are very rampant due to neglect by successive governments.
Foundation for Democratic Initiatives and Development has also implemented development projects in poor and rural- communities especially for children and youths.

Foundation for Democratic Initiatives and Development (FDID) works to enhance citizen’s active participation and development in upholding and promoting a sustainable development culture and participatory governance at the grass root levels, through effective information dissemination, advocacy, lobbying, dialogue fora, civic education and community driven activities.
Our operations are geared towards improving the lives of the grass root or less fortunate in every community we work and as a result of this our motto is Development through civil engagement.
Our slogan also reflects the positive will of the people we defend and work with."Alone we can do so little together we can do so much".

Foundation for Democratic Initiatives and Development (FDID) is not only committed to defend the rights of the human person but also remind them about their civic responsibilities as good citizens. We believe as an organisation that when the rights of people are advocated for and their civic responsibilities lobbied then development and peace are sure to come and together we can make poverty history.
Email : fdidsl@gmail.com
P.O Box 1133
Freetown,
Sierra Leone.

Posted by fdidsl at 7:28 AM No comments:

Sierra Leone is tiny West Africa state with about five million inhabitants.
This country is staggering to stabilize from all fronts; social, economic and political as it has been ranked among the poorest or least developed countries on the face of the earth by the United Nations Human Development Index.
The irony is that Sierra Leone is one of the countries that have the highest deposit of natural resources in the world.
The backwardness of this tiny West African state has been characterised by bad governance, corruption, maladministration, nepotism and gross human right abuses which made way for the eleven years gruesome civil war that lasted from 1991-2002.
The war has now ended with Sierra Leone trying to crip from being the most under developed nation in the world.
This can only be done with the aid of strong civil society organisations working across the country as watch dogs.
Posted by fdidsl at 6:20 AM No comments: